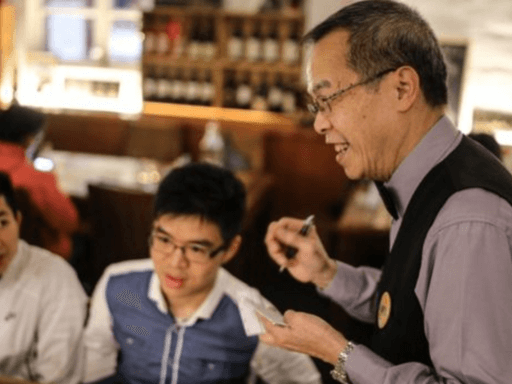 'I will keep working until I can't anymore'

There's no such thing as retirement any more for millions of elderly workers around the world.

Longer life expectancies combined with higher living costs means working until you physically can't is a reality for many.

However, that also means there's a trend emerging for a post-retirement career.

Juliana Liu visited a Hong Kong restaurant where the hiring policy emphasises life experience over other skills, while Matthew Wheeler and Priti Gupta picked up some tips from the knitting grandmothers of Bangalore in India.

When Choi Chor Tung approached his 65th birthday, he applied for a job at Gingko House, a Hong Kong social enterprise that mainly hires elderly workers at its four restaurants and the organic farm it uses to supply its eateries.

Mr Choi, who was at that point a butcher, wanted to join Gingko as he was afraid of being fired from his previous job because of his age.

"If you want to retire, then you have to have a lot of savings. But most people in Hong Kong don't have a lot of savings or pension money. It goes very quickly," he says. "Only a place like this will employ someone of my age. I'm 66. I will keep working until I can't work anymore."

Now he is a full-time kitchen worker making salads and pizza at Gingko's flagship restaurant, which serves both Chinese and Western food.

In Hong Kong, the sight of wizened, weather-beaten men and women bending over rubbish bins to collect scraps for sale is all too familiar. They are part of a dark secret: this city is one of the world's most unequal places in terms of the income distribution.

About one in five of its seven million people live in poverty, according to government figures. Among the elderly, one in three lives below the poverty line. In fact, the most recent official data suggests the poverty rate among people over 65 years of age has risen by 19% between 2009 and 2014.

She had no experience in the restaurant business but wanted to provide a sustainable way of employing senior citizens for as long as they were willing to work.

Since then, Gingko has employed more than 1,000 elderly people.

Bangalore is one of the world's major tech cities. It is India's IT hub. And, thanks to Lima Das and her team of industrious grannies, it is now India's knitting hub too.

In 2011, Lima set up grannysloveindia.com, a website that sells children's clothes knitted by grandmothers. It's an idea that has enabled women "in the second innings of their life" to find new purpose and make new friends.

"I had no clue it would reach a stage like this where people accept it, love the social cause of it," Lima says, sitting in her Bangalore apartment surrounded by stacks of wool.

Lima, a textile design graduate, got the idea for Granny's Love when she saw her mother-in-law knitting. "I thought if I give her design directions she can come up with something fabulous."

The business relies on a combination of new technology (the internet and social media apps) and good old-fashioned craft (knitting nans). All orders from the website arrive in Lima's email inbox.

She then creates the design, identifies the granny best suited to knit it, and sends the wool and the design to that granny. "Then, after a week, [the granny] sends back the product, other details are added, and it's packed together with a photo of the granny who made it, and posted to the customer," says Lima.

Getting the customers wasn't a problem. The challenge was to find the grannies and persuade them that knitting was a moneymaking skill.

"I would ask any granny I would meet, 'Do you knit? Do you know this craft?' My biggest challenge was to motivate them. They simply made garments for their families. For them, money was not in their mind."

The orders have rolled in, along with a regular flow of positive feedback from customers. And with the grannies becoming more confident with using modern technology, such as Facebook and Snapchat, they are now getting that feedback directly.